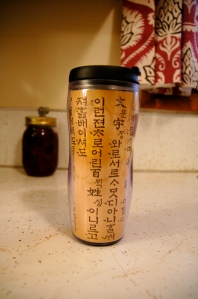 This is the before photo.

Some objects are more important than others. Take this Starbucks coffee cup, one of two sent to us by my husband’s friend in Korea. We’ve enjoyed the significance of the gift as much as the object itself.

Often in fiction, I carry an object through the story as a way to measure a character’s growth. The before and after of my character is reflected in the object’s fate or it is viewed by that character.

In my new novel, one of those objects is a small barrel organ manufactured in the 1700s by my protagonist’s grandfather. This particular object will play a huge role in the story, so I’m paying attention to where it is and how my protagonist carries it in the opening 30 pages. Soon, it’ll become an important part of the plot, but for now, I’m content to write about the strap around his neck, and the little box banging against his ribs as he navigates his new home, New York City in 1855.

Back to the set of coffee cups. Apparently my husband is the kind of person who checks the oven before preheating. I’ve always known this. And yet I never check the oven. Why would anyone leave something in the oven? Ahem. So enter a throw-together dinner Tuesday night, when I preheated to 400 degrees, and started smelling something funny. When I opened the oven door to investigate, there was a stinking, gooping blob slowly melting around the rack and threatening to slime its way into the bottom of the oven. It looked like molten glass, but also very organic, like a translucent cocoon, as if some large, multi-footed insect had crawled inside this sac to transform itself into a crazy kind of butterfly.

This is the after picture. Hmm.

Turns out, the revered Korean tumbler had some water caught in it, and my husband, the night before, had experimented with using low heat to evaporate the trapped liquid. As you can tell from the after picture, the water’s gone, but so’s the integrity of the cup. Oops.

On the positive, it’s time for him to reconnect with his friend in Korea, and the image of this cup, so totally turned into something else, barely recognizable but for the script showing through the hole in the re-hardened plastic, is a good metaphor for the change one’s characters should go through during the course of a well-plotted novel. Not that I’m advocating having characters melt down specifically. But the transformation they undergo during the course of a novel must be powerful enough to affect readers, to make them say ooh and ahhh–or oh no, not that!–and to remember that journey long after leaving the pages of your book.