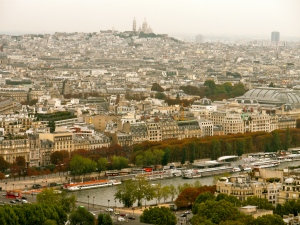 I shot this photo with a point-and-shoot, atop the Eiffel Tower, in October 2009.

My protagonist’s little brother Henri was supposed to die in Paris.

His demise, I admit, was quite vague. First I intended it to occur during the June Days Uprising of 1848. Possibly death by trampling.

But the timing didn’t work out. So then I figured Henri could just, umm, expire on the street. From fright, perhaps. Or a heart attack. His was to have been a very old-fashioned death. And his brother would to leave his body there, on the street, for no apparent reason.

As it turns out, there was a very good reason. Had I gone ahead and buried Henri in an appropriate fashion, instead of leaving his sketch unfinished, the cobblestones pressing into his cheek, his body not yet cold, I doubt I would have been able to resurrect him as my protagonist.

From these fertile seeds grew the idea of Henri having a weak constitution. But there’s still the question of Paris. Should his brother die instead? I carried that notion around for a week before deciding Jean-Jacques is needed at home. From a practical standpoint, there’s no way the family would allow their son to go to America if the other one was dead. There’d be nobody to take over the workshop.

Paris, part of the fabric of this growing novel since I decided to make it historical fiction, is now a question. Should they go to the city at all, and if so, why? And when? And for how long? And how will Napoleon III naming himself emperor in December 1852 change the city and the brothers’ experience of it? What will happen at home while they’re gone?

Before proceeding, I have to answer these two questions: What would a trip to Paris add to the story? How might it raise the stakes?

1 Response to The Wrong Protagonist, Part 2