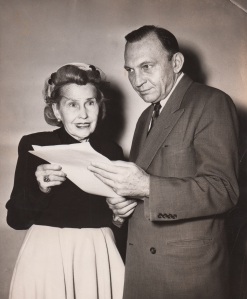 Annie Laurie Williams and her husband Maurice Crain represented some of the most important American authors, including Margaret Mitchell and Harper Lee.

Author Kristin Bailey Murphy is writing a nonfiction book that’ll be of great interest to anyone who admires the work of John Steinbeck, Margaret Mitchell, Lloyd C. Douglas and Harper Lee.

Intrigued? So am I.

The book is titled AFFECTIONATELY, DEVOTEDLY, AS EVER, and Kristin has been working on it for two years. She happens to be the great-niece of Annie Laurie Williams, a dramatic and motion picture agent whose clients included the very famous authors I just mentioned.

Along with offering a wealth of unpublished material about her great-aunt and her relationship with these iconic authors, Kristin’s book features a unique perspective on the history of literary and film agents. Annie Laurie began her practice in 1929 and retired in 1971. Williams’ husband, Maurice Crain, a literary agent himself, represented his own impressive roster of talent, including the authors of “Cheaper by the Dozen.”

Kristin has chosen a life-in-letters format to record her great-aunt’s influence on American culture, relying on a rich vein of family material as well as Columbia University’s archive of more than 100,000 pieces of Annie Laurie’s correspondence and personal effects. (Luckily, her great-aunt liked to keep everything.)

Before Kristin responded to my questions, she sent some excellent background material by email. So that’s why, for the first time in the Seven Questions interview series, I’m splitting her fascinating story into two parts. Today you’ll hear about Kristin and her great-aunt’s legacy. Then come back on Wednesday to check out the actual interview.

The vast amount of material about Annie Laurie (including personal effects, press clippings and contracts) presented Kristin with some challenges. She soon rejected the idea of a biography, since there aren’t enough people still alive who knew her great-aunt. Instead, she opted to focus on Annie Laurie’s letters.

“The correspondence itself told an interesting story, and what information it didn’t provide, I could–with the help of other sources, including my mother who was there during much of it,” Kristin explained.

She has spent the past two years culling through the raw material of her great-aunt’s life and weaving a cohesive narrative to connect the letters. Kristin focused her project on correspondence to and from Steinbeck, Mitchell, Douglas and Lee, as those letters offered the most compelling insights and exciting revelations.

As far as Kristin’s writing background, it’s extensive. She has written various kinds of web content as well as software user manuals and manga comic books. She also ghost-wrote for a bestselling author’s blog.

Kristin’s in the planning stages of her own blog, which will include some of the wonderful material that didn’t fit in the book, such as Annie Laurie’s husband’s correspondence.

“He was such a wordsmith, and reading his letters was like pulling aside a curtain on time and observing literary history,” Kristin said.

She added a pithy remark about how Maurice and Annie Laurie wrote their rejection letters: “Maurice’s and ALW’s rejection letters are hysterical, too. (I would have hated being on the receiving end of one!).”

Check out Kristin’s interview to find out more about AFFECTIONATELY, DEVOTEDLY, AS EVER, including how she approached researching her great-aunt, which one of these famous authors had terrible handwriting and the important role Nelle Harper Lee played in Kristin’s decision to research and write her great-aunt’s story.