This Riot Isn’t in My Outline… 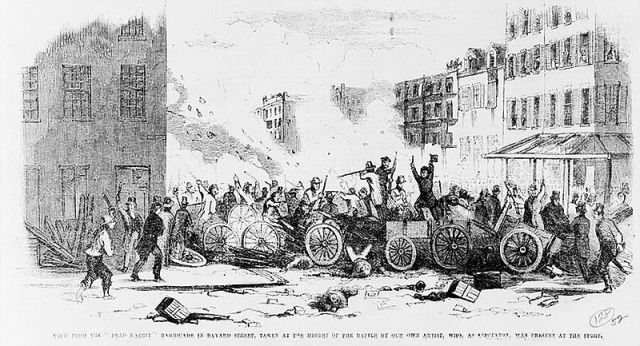 This is an 1857 wood engraving of the riot that I need to squish into the middle of my novel. The image is in the public domain.

My outline failed this week, halfway through my historical novel.

Until now I’ve been rowing along happily using my outline as the oars. I didn’t write down every scene, so there’s been a lot of invention along the way and some changes to the order of things. But each scene has led to another bullet point event on that hallowed outline. And I’ve stayed true to that unswerving vision. Until now.

I’m in the position of having to add another bullet point. And it’s a riot. Yes, really a riot, not the laughing kind. I recently watched “Gangs of New York.” Its historical inaccuracies have been pointed out in this National Geographic post, but the fact is that the riot in the opening scenes occurred when my protagonist Henri was nearby. Surely he would have been affected by it. Possibly hurt in it. Surely many modern-day readers, dropped into this place and time, would think of that movie and wonder about the absent rioting.

This new scene, of course, opens up all kinds of possibilities for Henri’s character development. And of course, I’m terrified. Whatever happens here affects the next few chapters, which have already been written, and might bounce me away from hitting another bullet point or two. Most importantly, the outcome of this street battle will affect how Henri sees his role in America, and how the other characters view him. But I’m putting my apprehension aside and working on this new scene. The advantages of adding it outweigh my fear.

Incidentally, while researching, I came across an invaluable resource for anyone writing about New York. The Bowery Boys offer free podcasts about the history of the city. They have a great archive of fascinating shows, and I’ve downloaded a bunch to enjoy during my upcoming writing retreat.

If you’re a plotter, do you often make major changes to your initial outline? Have you ever had to scrap part or all of your outline because your story moved in a different direction?

7 Responses to This Riot Isn’t in My Outline…