Stephen O’Donnell’s figurative paintings make viewers feel as if they’re peering into a secret world. His is an alternative history, replete with charm and sumptuous costumes, while still addressing modern sensibilities.

Stephen plays with gender roles as he drops readers into lavish settings, often painting himself in elaborate women’s dresses—and oh, the lifelike expressions he renders! Often his work depicts a private reaction to a narrative that’s right outside the frame, bringing a larger story-sense to each canvas. It feels as if he’s telling the most beautiful joke in the world, and we’ve been invited to watch it unfold.

Artists Wanted, a New York artists’ collective, recently awarded Stephen the top prize in its prestigious “Power of Self” self-portrait competition. The recipient receives “one year of your life paid for,” a video documentary about the artist and a party.

Stephen’s portraits tell stories that are infused with whimsy, exquisite details and historical accuracy, and I’m so excited to feature him today as part of the Seven Questions series. A special thank you goes to his wife, writer Gigi Little, for introducing me to his incredibly original work.

1. Stephen, your portraits are elegant, formal and historic, and yet the moments you capture are impish and modern. How would you describe your original style to someone who isn’t familiar with your work?

I think of myself as a genre painter. Like with classical genre painting, my pieces do capture a specific moment in time; something specific is happening when the image I visualize is frozen. Something dramatic—or not so dramatic. Since almost all my work is based on self-portrait, I’m the star of whatever little story is being told. I love embedding myself in a historic setting. I love working to get all the details right.

More often than not, I represent myself in women’s costume. The female side of my personality is very developed, so it feels very natural to go with female costume—which is usually the most elaborate, the most picturesque.  And it’s also usually the most fun.

I think where my work differs from the majority of contemporary art and, honestly, from the vast majority of art in general, is that I’m not afraid to not take myself seriously. In telling the story, there’s often a joke being told. Even if it’s just the humor of a big, burly guy wearing the dainty attire of a French countess.

2. You recently won the prestigious “Power of Self” self-portrait competition hosted by New York-based Artists Wanted. What does that honor mean to you, and what do you plan to focus on in the upcoming year?

It was a big surprise. I don’t think of my work as really mainstream at all; I think of it as rather a niche product. So I was really surprised that out of all those artists, they chose me.

My career has been going very well in the last couple years, and I feel I’ve been inching forward to a place where I will be able to transition into being a full-time artist. The kind of work I do takes so much time to produce. So obviously the financial aspect of this prize is a great step in that direction. The focus for the next year will be to have more time to make more work. No matter what else I need or want to do to further my career, it always comes down to making more art.

3. Why self portraiture? Has rendering yourself on canvas, in art, in a variety of classical settings and poses—often in elaborate gowns—changed your view of yourself?

Right at the beginning of my career, I fell into self portraiture; it wasn’t something I’d done at all up to that point. But once I opened that door, it just felt so natural.  I’ve often talked about how I feel that using the self portrait takes away the trickiest part of portraiture: that the painting is about someone. If I’m painting myself, it’s a lot easier to focus on what’s actually going on in the painting. What story I’m telling or even what question I’m posing.

The historicism in my work, which is something I’ve mostly focused on in the last several years is, more than anything for me, fun. I love immersing myself in those periods. I get to live a life in my paintings that isn’t possible, was never possible. But in a way, these other lives that I represent are in truth so rooted in my personality, in my imagination—in the history of my imagination—that I think painting out these stories, these alternate me’s, has probably made me a more integrated person. In my paintings, I can let all the different aspects of myself come out to play.

4. The level of detail you execute in each of your works is astounding. You render every strand of hair, every bit of lace and every jeweled embellishment with great care. Is that aesthetic inspired by your love of all things classical, or is it related to your drive to create a specific world within your art? Both? Neither?

The level of detail relates to two things. One, I’m kind of showing off. And I figure if I’m going to go to all the trouble to do all the research I do, and then come up with original designs for a diamond necklace or court gown or gilt table, something that would be perfectly recognizable to a French marquise circa 1785, say, I’m damn well going to make sure that the viewer can see all that.

But the other reason is that the particular style I have—really a lack of a painterly style—is so plain, in a way. I’m not able to just suggest detail. If I were a painter like John Singer Sargent or Giovanni Boldini, you would be able to see, with the flick of a brush stroke, or a daub of paint, the details that are all there, existing, in the painting, even though they’re often completely abstracted. My style requires that I spell it all out, describe all the detail plainly and accurately.

Also, partially because of the difficulties of working with acrylic paint, my paintings usually aren’t very shadowy. They’re pretty high-key. So everything is visible and has to be shown.

I think, in truth, my painting style isn’t really classical at all. I’m self-taught, and I don’t really paint like classical painters, so in a way I’m representing that classical world through a completely different lens.  As much as possible, I try to make all the details I’m representing as accurate for that time and place but, in the end, I’m really creating a world that is only specific to me.

5. How much research goes into your paintings? Do you have any favorite history books or art books that you use as references for costuming or settings? 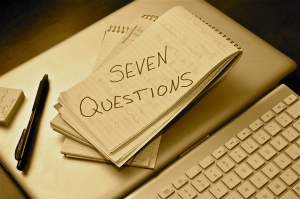 So much research goes into each of my paintings. I want to get every period detail as accurate as I can make it. It doesn’t matter to me if the viewer doesn’t necessarily have the knowledge to respond to that accuracy. But that accuracy is very important to me. With the work I do, it would be very easy to slip into pastiche. And in looking back on earlier work, sometimes I feel that I didn’t quite obtain, then, the level of accuracy that I would be able to achieve now. And so there’s an ongoing self-education. I have so many books—history books and art books—and I’m constantly online looking for images that I can use as reference to design original costumes and furniture to use in my tableaux.

6. Tell us a little about your creative process. How do you begin a new piece—with an image in mind or a particular idea? When do you know a painting is finished? 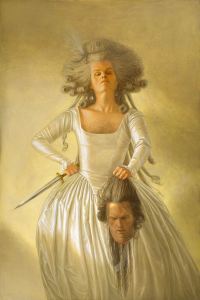 It used to be that almost my entire creative process was done subconsciously. An image would just appear in my head, and I would pretty much just paint what I saw there. Often now, I will come up with an idea for a painting that is suggested by some aspect of some old painting I see a reproduction of.  In a book or online.  However an idea comes to me, there’s always a moment of recognition that this is a painting; I can make this image in my head into a painting. The pictorial component is always what is there first. The meaning behind it is often only accessible after the work itself is done.

As for knowing when a painting is finished, it tells me when it’s finished. I keep looking and looking for things that need to be worked on. Even after the work appears to be totally complete. Even after I’ve signed the piece. My eye is always attuned to the thing that isn’t working, that isn’t quite right.  My eye is immediately drawn to that.  So when the painting stops turning up things for me to look at, I know it’s done.

7. Who are some of your favorite artists, and what do you love about their work?

Many of my favorite artists are painters that most people have never even heard of. A lot of them wouldn’t be considered even very good artists. Much of what I get from them is instruction on how to make my work better. I can learn by their weaknesses and can be inspired by their moments of genius.  The great masters can be a bit daunting. And so embedded in our consciousness that it’s usually impossible to see them clearly. Mostly the artists I love are the great portrait painters. Velasquez, Van Dyck, Quentin de la Tour, Vigée le Brun, Gerard, Winterhalter, Sargent, Serov.

Of the great masters, no one speaks to me more than Vermeer. His amazing immediacy easily transcends his iconic status; his “importance” and celebrity never cloud that for me. I love the perverse rigor of Bronzino and the Mannerists. I never cease to wonder at the variety and precision of the Dutch artists of the seventeenth century—still-life, landscape, portrait, genre, allegory—all of it just knocks me out.  And Friedrich is probably the greatest poet of all painters; God and the unconscious are in all his work.

Stephen, thank you so much for participating in Seven Questions. For more information, and more of his amazing portraits, check out www.stephenodonnellartist.com. Stephen blogs in two places. Gods and Foolish Grandeur: Life in the Arts… From a Retrograde Perspective features his thoughts and opinions on art. Starlight and Sweet Music: The Musings of Madeline Prévert focuses on his 1930s performance persona.