Giving Myself Permission to Revise 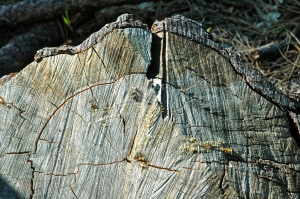 I began an overall revision of my first 85,000 words while on my summer writing retreat, where seven days of quiet introspection led me to focus on the details of my work and the beautiful landscape.

I break this all the time, but don’t always admit to it.

When I blogged about submitting my first draft to my critique group in mid-September, Jody Moller asked what kind of first draft it was. I admitted then that the unfinished manuscript had been edited to some degree, and if I had actually written the ending, maybe I’d be calling it the second draft.

While writing the first 85,000 words of LOST NOTES, whenever I got truly lost, I went back to the beginning to reread and rethink the characters. That gave me some new insights on my protagonist’s development, which then got the story rolling in the right direction. I was able to correct some major issues. (Think the Barbie Jeep method with plenty of braking and reversing.) Changing my protagonist was one of the biggest changes that came out of those wave-like rounds of revising. But each one yielded book-changing epiphanies.

Then there was the actual revision work that ate up August and September. It’s always asking a lot to hand over that many words to a select group of writers. I wanted a polish on these fragile early pages. Not necessarily a high-gloss final polish, since that tends to obscure the real problems, but maybe a semi-gloss. Or at least an eggshell. (Can you tell I’m in the process of picking wall paint for my office?) That work was partially line editing, but mostly looking for places to cut and dead-end scenes to re-invigorate. So that’s why, when answering Jody’s question, I said my first draft was more like a second draft. Minus the ending.

And now I’m still struggling to nail down that ending. Trying to pull everything together. I revised my outline, and cut down the number of scenes, but I keep throwing the brakes on every time I inch forward. Things don’t feel right. Not yet. And I am beginning to suspect that it’s because I need to do one of those wave-like revisions, starting at the beginning of Section 3, and flowing through to where one of my characters is reunited with her father. Which is where I’m stuck right now.

And so that, my friends, is exactly what I’m going to to do. Give myself permission to go back to the beginning of this section and muck around. Make changes. Make observations. And hopefully, at the end of that process, I’ll make some headway.

20 Responses to Giving Myself Permission to Revise