Posted on November 3, 2011 by Laura Stanfill

Last August, after finishing my literary novel BODY COPY, I started writing a new one. 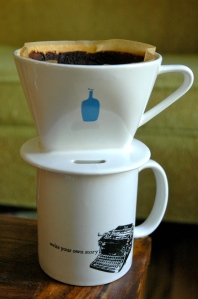 Coffee has helped fuel this first year of this novel-in-progress.

Aptly, I titled the folder “new novel.” It was about two kids from music-box collecting families. I wrote some first-draft scenes. I jotted down notes about them and their parents and their houses and their lives. Then I started writing about one of the pieces in one of those collections.

This particular piece was such a bizarre and wonderful object I wanted to explore its roots. Who made instruments like these? And why? As I began researching the subject, I found myself with one historical character. Jean-Jacques Blanchard. The son of a music box making family that specialized in a specific instrument that was produced in France.

Somewhere around then, I went to lunch with a writer friend, Jackie Shannon Hollis, who suggested I follow my story. The historical part of it. I was fighting that concept, thinking perhaps I could take my two contemporary characters and feed in this fascinating object history around them. Somehow. But my last novel played with the intersection between past and present. I didn’t want to commit to that dance again.

Jackie flat out suggested I write historical fiction. Me? Really? I spent a lot of time considering that option. As I considered, I wrote more pages about my music box family. A plot developed.

I created a new folder, “Jean-Jacques,” on October 24, 2010. He’s now my protagonist’s brother, but that’s another story. What’s important is that I launched into this historical novel, LOST NOTES, last October. Which means I’ve just completed my first year working on this first draft.

I can’t even begin to guess how much longer this novel will take me. BODY COPY took six years. This one feels pretty fleshed out, for a first draft, but I know there’s a lot of work to be done. At least a year’s worth. Perhaps more. So I’m celebrating this anniversary by opening a document and continuing to work.

How long does it take you to write a novel? Does it depend on the subject, or do you have a pretty consistent timeline or series of goals?

17 Responses to My WIP’s Anniversary