Pumpkin Is My Theme

Posted on November 7, 2011 by Laura Stanfill 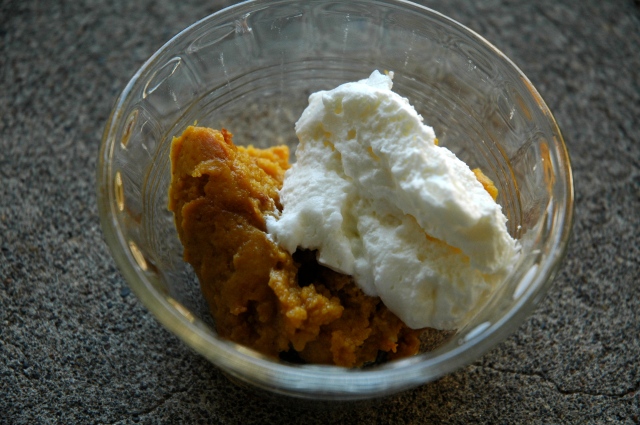 Mmm... I love my grandma's pumpkin custard with a sweet dollop of whipped cream.

While so many folks have been focused on escalating word counts for National Novel Writing Month, it’s no secret that I’ve been distracted from writing so far this month.

I wake up thinking about house projects and various spinning plates, not my protagonist. I fear that’ll only get more pronounced as we launch into the holiday season and its many joys, celebrations and family moments. Although I’m putting time in on the page every morning, the other hours of the day seem to be focused on more concrete happenings.

The point is this: pumpkin.

I thought my infatuation would end with October, but no, my desire to bake has only gotten stronger now that November is here. I’ve made a pumpkin loaf out of the America’s Test Kitchen cookbook, another loaf with dried cranberries and my grandmother’s famous pumpkin custard, which calls for “a scant cup of sugar.” That was my favorite part of the recipe–hearing her voice in that typewritten directive. Of course I’ve also been enjoying cooking heirloom squash.

But right now we’re talking pumpkin. I only started baking regularly in the past year or two, but I enjoy trying new recipes and sharing the results with the neighbors. So now, instead of hashing out themes in my novel, or answering the book-changing question that I’ve asked myself, I’ve been trying to figure out what to do with the next can of organic pumpkin.

If I keep floundering around in this final stretch of my novel, maybe I’ll keep cooking pumpkin-themed items through December and January and… Anyone have a good recipe for pumpkin scones?

16 Responses to Pumpkin Is My Theme