Posted on November 9, 2011 by Laura Stanfill 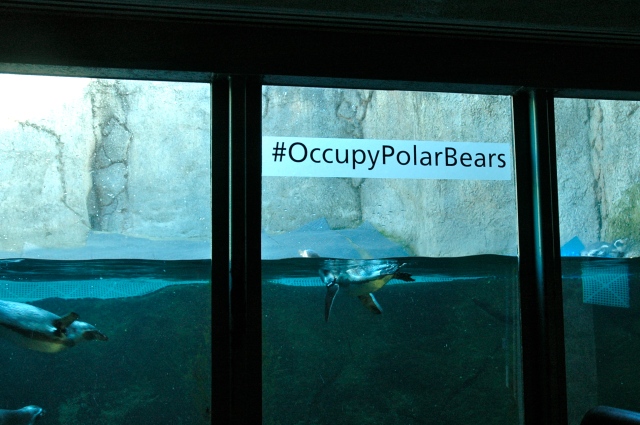 The penguins have taken over the polar bears' home!

I was tickled to see these banners up in the penguin exhibit at the Oregon Zoo on a recent visit. Apparently, the penguins are occupying the polar bears’ quarters in the name of a new water filtration system in their usual residence.

So clever. I love our zoo.

Talk about using social media to increase awareness. There’s actually an Occupy Polar Bears Facebook page, featuring cute photos of the birds and reminders about climate change and water conservation. And then the penguins have a blog, too.

Just take a look at their demands.

The zoo estimates the new filtration system in the Penguinarium will save 7 million gallons of water per year. The improvement is one of numerous projects funded through the $125 million Oregon Zoo bond that voters approved in 2008.

As writers, we are faced with connecting to readers and potential readers through social media–or, we’re told, we’ll never have success in getting our books out there. And as a result, we talk a lot about social media. Sometimes it all gets too serious. Or too overwhelming.

The #OccupyPolarBears movement is at once refreshing, funny and interesting. It’s promotional in nature, and it’s getting important environmental facts out to the public, but it’s also entertaining. I’m still a social media novice, and I’m not even on Facebook or Twitter, but I feel like there’s a good lesson to be learned from these penguins and their occupation.

Unlike more traditional self-promotion efforts, their kind of marketing makes us humans smile. And that’s the way to woo supporters. I mean readers.