I’ve been playing around with the second chapter of my historical novel for a few months now.

I’m working with the same old plot points, but I’m trying to tell the story in different ways.

Ultimately I want to give my protagonist a richer interior life without sacrificing the epic sound of the omniscient narrator. This amounts to moving the authorial camera back and forth, trying to figure out when to zoom in on Henri and when to use the distant, wry narrator voice I adore. I’ve never worked in third person, let alone omniscient, so Chapter 2 has become a master class in point of view. 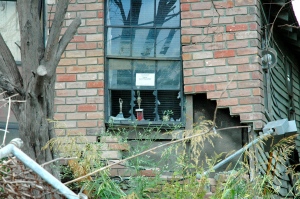 I took these two photos in the Ninth Ward of New Orleans a year after Katrina. They show the same view of the same house, but framed differently.

It makes sense to be working on this particular chapter. We put so much stock in beginnings, so there’s a lot of pressure with Chapter 1. If that first page doesn’t work, you’ll lose the reader. Conversely, if I were obsessing over Chapter 8, there would be so much to go back and fix. I wouldn’t know whether to go backwards or forwards after finishing the chapter.

In Chapter 2, my protagonist’s father loses an eye in a workshop accident. The boy races to the village to fetch the doctor and then faints on the doorstep. The doctor diagnoses Henri with a weak constitution. And that diagnosis launches the rest of the story. 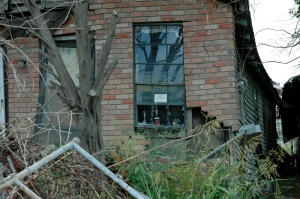 Looking at these images, and weighing which one is more compelling, and which one I should delete, is similar to the way I've been approaching my novel revisions.

If I can get these scenes right, balancing the interior life of my protagonist with the voice of society within this small town, then I can take what I’ve learned and apply it to other chapters. It seems extremely important to figure this out before going any further. After all, I know the story now. What I don’t know involves how distant I feel from my protagonist and how to get closer while retaining the historical epic sound I love.

That’s not to say I’ve been totally caught up in the minutiae. I’ve actually been rewriting these scenes from scratch, over and over, trying to figure this puzzle out. I have 50 single-spaced pages in my Chapter 2 document. Most of that I’ve written and discarded at the bottom of the page.

While the work has been infuriatingly slow, it’s also rewarding. I know Henri much better. I’m learning how to zoom in and out. I’ve cut out extra language and collapsed the distance between the reader and this 19th century French village. I’m almost ready to move on to Chapter 3.

Have you done any point of view explorations?

16 Responses to Studying Point of View Through Revising Chapter 2