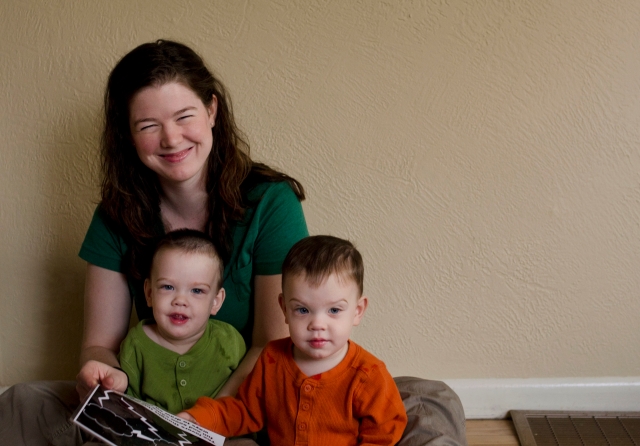 Shasta Kearns Moore holds a copy of Dark & Light and her twin boys, Malachi and J.J., 23 months. Malachi has cerebral palsy, and Shasta is using Kickstarter to fund her children’s book as a way to pay for Malachi’s treatments.

The amazing Shasta Kearns Moore–author, journalist and mom of identical twins–has written an innovative children’s book, and she needs your help to produce it.

Dark & Light: A love story for babies features engaging black-and-white images and an uplifting story about identity and sharing. Here’s a video of Shasta explaining the project and reading the book to her son, Malachi.

Shasta hopes to raise $5,000 or more by selling her book through the fund-raising site Kickstarter to support treatments for Malachi, who has cerebral palsy.  Shasta blogs about Malachi and his identical twin brother at Outrageousfortune.net. The boys were born ten weeks premature, and a brain bleed has caused Malachi’s gross motor delays. The treatment Shasta will fund with the book proceeds is called the Anat Baniel Method. It is not covered by her family’s health insurance.

“My secret dream is for this campaign to go viral and raise so much money that we can start a nonprofit to help other children get ABM lessons,” Shasta said in her campaign’s press release. “I wasted a lot of time being skeptical of this ‘alternative treatment’ but the theories are logically sound and the evidence in my child and friends’ children became overwhelming. I want to shorten the learning curve for others so that their children can get these treatments earlier and more often than my child did.”

I met Shasta through a community newspaper chain where we both used to work. She is one of the most driven and hard-working people I know, and I’m excited to let people know about her Kickstarter campaign.

To pledge funds for this project, or to learn more, go to the Dark & Light Kickstarter page. Shasta must raise $5,000 in one month or she won’t get to keep any of the donations. The deadline is June 27. Shasta offers special bonuses at different funding levels, so check them out and give what you can. One hundred percent of the profits will go to Malachi’s treatments.

Another way to help is by spreading the word about Shasta’s fund-raiser. Feel free to reblog this post or Tweet it, or post a link to her Kickstarter campaign on your blog. And if you want to learn more about this Portland, Oregon, mom and author, check out her blog and the Seven Questions interview about her novella.

7 Responses to Fund a Children’s Book, Help a 2-Year-Old Boy