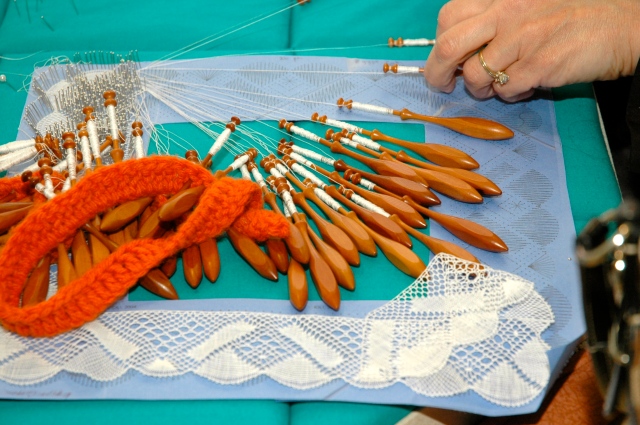 Lynda Libby is working on an intricate handkerchief edging. The wooden bobbins are each holding one strand of thread, and she manipulates the bobbins and thread to create the lace.

Lace, specifically bobbin lace, has become an important part of Lost Notes, my 19th century epic novel. It showed up in the background of the first draft, but now, in the second draft, I’m weaving bobbin lace into my plot.

Reading about a craft isn’t the same as seeing someone do it. With that in mind, I contacted Lynda Libby from The Portland Lace Society. She invited me to the group’s monthly meeting at a local community center. I spent two hours on June 7 watching these amazing women cross and twist their bobbins to create incredibly tiny gauge works of art.

In bobbin lace, each thread is attached to its own bobbin, and pairs of them are manipulated over and under each other in a way that creates a beautiful pattern. Historically, bobbins were made by local woodcarvers, so they were not standardized.

“All across Europe, all these different woodcarvers would make bobbins, not knowing what the other woodcarvers were doing,” explained Alice Howell, who is very knowledgeable about bobbin lace history.

The bobbins were made according to the skill of the local woodcarvers, the specifications of the most important lace-making woman in the village, and the weight of the thread that village used, Alice explained. Fine, expensive thread, such as silk, meant a lighter weight bobbin. Alice told me that 18 strands of silk would equal one strand of today’s sewing thread. Wow.

On June 7, Alice was working on a pattern from the 1600s from Antwerp, Belgium, using linen thread. As a knitter, I was fascinated to realize that bobbin lace makers use different kinds of thread depending on what’s available and what effect is desired. Cotton is easiest to work with, Alice said, due to its smoothness. It slides nicely into place. Linen has more traction and lasts for a long time. Silk wears out fastest. Often lace-makers use what their teachers use.

Remember studying Eli Whitney and the cotton gin in school? Its invention in 1790 revolutionized lacemaking. “In a lot of places, linen went out of style,” Alice said. “Machine laces were taking over. Smooth cotton thread went through the machines better.”

After learning such fascinating facts from Alice, I moved over to watch Lynda work on her handkerchief edging. She showed me how she manipulated four bobbins at once, demonstrating crossing and twisting. I imagined that twisting would involve taking two bobbins and turning them in a circle to twist the threads together, but I was wrong.

“Twisting is not winding,” Lynda told me. “It’s exchanging the location of the bobbins. It’s always across, and usually you twist both pairs of bobbins.”

Lynda, a book binder by trade, learned bobbin lace 22 years ago in the Netherlands when she had three preschoolers and was pregnant with the fourth. You can see some of her lacework on her website.

Shelley showed me how to wind bobbins. She had a bag of them and needed to wind about a yard of thread onto each one. The thread must be rolled onto the bobbin so it doesn’t twist.

Pins are used in bobbin lace to stabilize the thread and give it something to tension against, Shelley explained. She said some projects use thousands of pins. “It depends on the pattern and whether you pull the pins off as you go.”

Sandra was working on Bucks Point lace–an edging for a hankie. I also received excellent information and guidance from Pauline, Shirley and Lise.

Thanks to everyone from The Portland Lace Society for answering my questions and showing me your work.

17 Responses to Novel Research: The Art of Bobbin Lace