Read This Book, Then Mark Your Calendar

Selden Edwards is at the top of my list of inspirational novelists.

He began working on a manuscript in 1974 at Stanford. Thirty years later, after many drafts and many rejections, Selden earned an agent and sold his novel to Dutton. The Little Book, an engrossing historical novel set in fin-de-siècle Vienna, became a bestseller in 2008. As he says, he’s the poster child for “never give up.”

I discovered Selden’s amazing, tightly crafted book in 2010 on a trip to Powell’s when I was just starting my historical novel. Until I found his work, I didn’t have any role models in the genre. The Little Book is exactly the kind of compelling, plot-driven, but still literary, story that I hope to create with my work-in-progress. When I learned about Selden’s long road to publication, I was even more impressed! Read my blog post about The Little Book  for details about the novel. 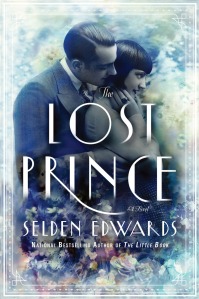 Selden’s second book, The Lost Prince, is due out on August 16. Due to the time-travel element, this one is both a prequel and a sequel, set during World War I. Which means you have about six weeks to read The Little Book.

Here’s a teaser–and another reason why you should go get The Little Book right now. Selden, one of the very best examples of why you should keep writing despite rejections, has graciously agreed to be interviewed here as part of my Seven Questions series. I’ll be running the piece on August 16 to coincide with the launch of The Lost Prince.

This is going to be an incredible moment here on my blog.

I have the finished interview in my files right now, and I can’t wait to publish it. But I have to wait six more weeks! So, in the meantime, go read The Little Book and then come back here on August 16 to learn more about Selden’s thoughts on research, rejections and the writing process. His thoughts on writing have shaped me as a novelist, and I can’t wait to share his insights with all of you.

13 Responses to Read This Book, Then Mark Your Calendar