A Brilliant Novel in the World

Yuvi Zalkow’s debut is scheduled for release tomorrow, and he’ll be speaking at Powell’s in Portland on Thursday.

Tomorrow marks the official launch of Yuvi Zalkow’s A Brilliant Novel in the Works.

Let’s all stand on our desks in our underwear to celebrate. That’s where Yuvi’s protagonist Yuvi finds himself at the beginning of this unusual, and hilarious, debut novel about writing a novel.

A Brilliant Novel in the Works, released by MP Publishing, is an incisive portrait of the act of creation and its effect on relationships. It’s a mind-boggling crazy quilt of a novel, the present-tense scenes stitched together with short, elegant stories ostensibly written by the neurotic but lovable protagonist Yuvi (but of course really written by Yuvi the author). The blurring of the line between fiction and memoir gives this playful book a powerful emotional punch. Amid hilarious riffs on Protestant sandwiches and poop, there are honest moments of connection and disconnection.

You may know Yuvi due to his Failed Writer series of presentations. I met him through the Pinewood Table workshop led by Stevan Allred and Joanna Rose, and that’s where I read early drafts of A Brilliant Novel in the Works. I remember leaving those sessions desperate to tell other people in my everyday life about this wickedly funny, rule-breaking novel that my writer-friend was somehow pulling off. I still feel that intense need to share the experience of reading this book with other people. And it’s unbelievably exciting that I can now rave about A Brilliant Novel in the Works, and as of tomorrow, you’ll be able to read it yourself.

In honor of his novel’s release, I invited Yuvi here today to have a conversation about his book, rejections and his career. Welcome, Yuvi!

Laura: Many novelists dream incessantly about their launch dates and hungry readers grabbing for their newborn books. How do you feel today? I think it would be especially interesting to ask Yuvi your protagonist, who is standing on his desk in his underwear in the first chapter, how he feels.

Yuvi: It’s all a crazy ride for me, thrilling and horrifying at the same time. On one hand, I’ve been dreaming about publishing this book for years. But also, my list of worries has only grown because of this enhanced exposure. As for the Yuvi character in my novel… Well I’m sure it’s pretty clear to most readers that I toy with the boundary between fiction and memoir. And this character’s list of worries isn’t so different than my own. But I really don’t know how he would function in this phase of his own novel’s development.

As I started envisioning the end of my book, it was more about an emotional and a relational sort of growth for my protagonist than about him getting his novel published. Maybe we’ll deal with that issue in the sequel. (Just kidding. Though friends tease me that I should write Another Brilliant Novel in the Works.)

Laura: This week’s theme is about never giving up. On Thursday I’m interviewing Selden Edwards about the launch of his second novel, The Lost Prince. He spent thirty years working on his debut, The Little Book, and it became a bestseller. Yuvi, you’re the master at setting rejections aside and continuing to write and submit, and look at where that persistence has gotten you. A published novel. A reading at Powell’s. A story in Glimmer Train. Many other published works. Have you just kept writing despite the rejections? What advice would you give to novelists, who often spend years working on one project only to get rejected? 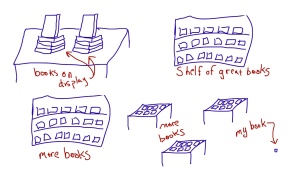 Yuvi’s Failed Writer presentations include charming, hand-drawn illustrations like this one.

Yuvi: Well, on one hand, I have a more crooked approach than one of those “never give up” sorts of people. I give up all the time. I second guess and third guess and fourth guess myself daily. Every week I question the value of everything I do. I also think that some projects are really worth giving up. Or at least putting aside for a time… Uh oh. Now I’m getting too pessimistic sounding.

I guess my point is that I think it is healthy to expect it to be hard and exhausting and full of missteps and reconsiderations.  But you also have to love it enough on some deep deep level to stay stupidly (or “stubbornly” if, unlike me, you don’t like calling yourself stupid) curious and excited and engaged with your writing projects. This curiosity/excitedness/engagement has to be strong enough to withstand many short-term rejections and hurdles.

Laura: What’s your writing dream now? Where do you see yourself as a writer in five years?

Yuvi: I always suck at that question during job interviews. Let’s see… I’d like to find a way to write books while simultaneously using this video thing I do in a more official manner (rather doing them at night as a third job). But I haven’t actually dedicated enough time to make a plan yet. Can I follow up in a year about a five-year plan?

Laura: I believe in community and supporting other writers, and I feel like we’re one big writing family here on my blog. Is there any way my readers can help you get the word out about your book?

Yuvi: Well I’d be thrilled if readers gave my book a peek (http://brilliantnovel.com) and spread the word if they are affected by it. (Getting the word out has been an awkward experience for me!) I’m also trying to bully bloggers into writing this week about fear and failure from their own experience, which they can read more about here: http://yuvizalkow.com/general/fear-failure-experiment/.

Thanks so much, Laura! I love what you do here on this blog and how you connect with the writing community. And thank you readers for dropping by!

Thanks so much for visiting my blog today, Yuvi, and congratulations on A Brilliant Novel in the Works. You can find links about where to buy the book on Yuvi’s website. Check out his list of upcoming events–including his reading at the downtown Portland Powell’s Books at 7:30 p.m. Thursday, August 16.

If you’re curious about how the author of the Failed Writer video series is handling success, here’s Yuvi’s response. And just so you’re aware of the adult content in the book, check out Kristen Forbes’ eloquent description.

22 Responses to A Brilliant Novel in the World