Posted on November 5, 2012 by Laura Stanfill

At the end of the reading, I invited all the contributors up on stage for Q and A. There were 21 of us–exactly half the authors who are involved in Brave on the Page.

We had such an amazing book launch for Brave on the Page on Saturday. There were:

I’m so glad I opted to rent a community center gym so we had plenty of space! 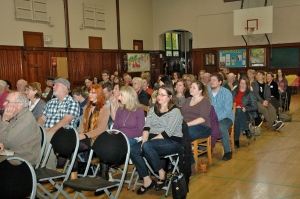 I was so amazed at how many people I knew–and didn’t know–were in the audience.

Everyone did such a great job. Liz Prato and Michael Gettel-Gilmartin kicked it off by reading from their work. Liz read part of a story I’ve heard before and have always loved, and Michael read the entertaining opening to his novel Shakespeare on the Lam.

Then Kristen Forbes, Joanna Rose, Stevan Allred, Steve Denniston, Bart King, Nancy Townsley and Gigi Little read their flash essays from Brave on the Page. That was a fun way to showcase a lot of writers, especially those who contributed in various ways to the book.

Steve Denniston reads his flash essay, “Pen and Paper,” at Saturday’s launch of Brave on the Page.

Kristen wrote the title essay. Joanna and Stevan co-teach creative writing at the Pinewood Table and have mentored many of the Brave on the Page contributors, including me. Nancy was one of the copy editors, and Gigi designed the cover and served as my primary brainstorm partner throughout the publishing process. The creativity of Bart’s essay title, “Fish Lake, Yo,” made me realize I wanted people to come up with titles that went beyond the question word prompts. And I asked Steve to participate because he’s so very funny, and it was an honor to hear him read his essay, “Pen and Paper,” about some of the hilarious quotes he wrote down and then incorporated into his novel.

The final two readers were Duncan Ellis, reading from his speculative novel, and me. I reworked a piece from my 19th century novel to turn it into a short story about a canary named Buster.

So many of these writers talked about the book and the sense of community it represents.  It was such an honor, for me, to be able to put this book together and to feature so many writers who mean so much to me, both creatively and as a person. Joanna Rose, preparing to read her “Pinewood Table” poem, said “This book epitomizes what writing in Portland is for me and so many people–a collective effort.” I loved that so much I wrote it down on the front of the printout of my story.

For Q and A, I invited all 21 authors on stage and we sure filled it! Questions included how we find the discipline to write, what everyone is working on right now and when each person knew he or she wanted to be a writer. A number of us–most all of us–said we knew before second grade.

Bart King, in case his name sounds familiar, is the bestselling author of The Big Book of Boy Stuff and The Big Book of Girl Stuff, among other wonderful middle grade books. Not only did he contribute his comedic talent to Saturday’s event, he also used his muscle. 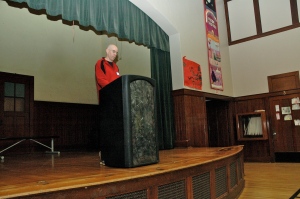 Bart King reads his essay, “Fish Lake, Yo,” from Brave on the Page, and when he was finished, he gave a heartfelt short speech on the importance of going offline when writing.

As it turns out, when we arrived at the Fulton Park Community Center as scheduled, at 1:45 for our 2 p.m. event, there weren’t enough chairs. Bart (bravely, since this was the Brave on the Page party) volunteered to join my husband in a mad minivan dash to another community center to get 40 more chairs. Instead, my husband in a flash of brilliance led Bart across the street to the church, which was thankfully open because of a book fair. Pastor Steve okayed us borrowing chairs. Bart browsed the sale until he found a book to give away to the first audience member who said what the last word was on page 93 of Brave on the Page. (It was “contrary”–coincidentally or not, the last word of Bart’s bio.) I won’t tell you what book it was, but suffice it to say the cashier was a bit surprised–and so was the winner.

I am going to bet that I am one of a very few event organizers that has asked a bestselling author to not only set up chairs, but carry them from one building to another. (Thanks, Bart!)

I snapped this photo of Stephen and Gigi after the reading. Aren’t they adorable?

If you are interested in how authors prepare themselves for their readings, you must read “Getting Ready for the Reading,” a heartfelt, voicey essay by Gigi Little about preparing to attend our launch event. Stephen, Gigi’s husband, is the one artist I sneaked into the book because his paintings tell narrative stories.

For some more photos from the launch, check out Forest Avenue Press’ post, 90 in Attendance.

And here’s one more fun link from this busy, exciting week. Julia Stoops, the founder of Blue Mouse Monkey, called Brave on the Page remarkable for three reasons. Read “Oregon Writers on Craft and the Creative Life” to find out what they are.

What was the biggest–or most exciting–reading you’ve ever been to?

25 Responses to The First Brave Reading