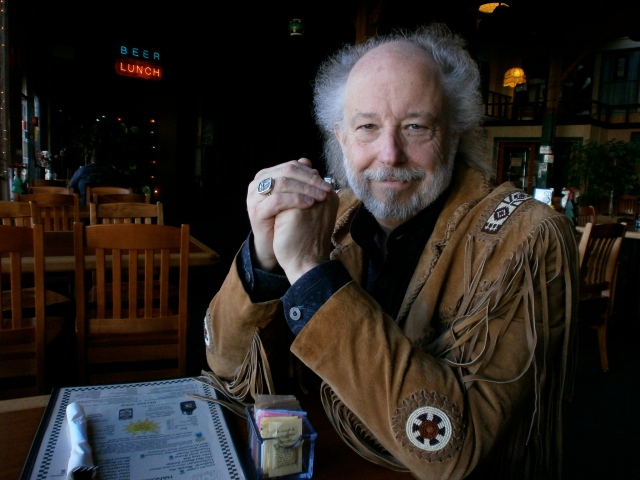 Gregg Townsley is the author of a series of westerns that begins with East Jesus, Nevada.

Gregg has many identities all rolled into one kind-hearted, emotionally intelligent individual—father, husband, pastor, martial arts expert, fast draw shooter, and now author and publisher. He’s combined his wise view of the world with his sense of humor and his interests in East Jesus, Nevada, which will be followed by sequels The Lady of the Lake and The Pinkerton Years.

As a fast draw enthusiast and the president of Oregon Fast Draw, Gregg gets gunfights on the page with a sharp eye and ear for detail, and his protagonist W.W. Ronin doesn’t hesitate to comment on the emotional implications of doing battle with another human being.

“Some people deserve to be killed, one of the Earp brothers had told him,” Gregg writes about Ronin in East Jesus, Nevada. “He liked that, but he preferred, when given the opportunity, to use his brain instead of his brawn, his guts instead of his gun, though he wasn’t against pushing people into a wall or two along the way when things got difficult.”

Gregg founded Two Bears Books with his wife Nancy, an award-winning journalist. “Two Bears Books is committed to providing real books, about real places, for real people with real interests, in both e-book and paper formats for years to come,” reads the mission statement on Gregg’s author website.

Gregg discusses his decision to write a novel in the essay, “What? Me? Well… Maybe!” is featured in the anthology Brave on the Page: Oregon Writers on Craft and the Creative Life, published by Forest Avenue Press in 2012. It’s an honor to have him here today as part of the Seven Questions Series of author interviews.

1. Tell us about your new book, East Jesus, Nevada.

Thanks for your interest Laura. East Jesus, Nevada is a Western. The story begins in the fall of 1879, when Native American children turn up missing from a Christian mission, just south of Carson City, Nevada’s capital.  Two fast friends–an Episcopal minister, who has left his vocation to explore the American West as a detective and bounty hunter, and a dusty but gregarious Ormsby County deputy sheriff–attempt to rescue them.

I’ve made a serious effort to be as historically accurate as I can be. I’ve worked hard to get the novel’s setting right, as well as many of the events and persons living in that location and time.  The major characters of the novel, of course, though well researched, spring from my imagination.

The book is currently available on Amazon and in selected bookstores.

2. I understand that setting plays a big part in this novel. Where does it take place, and what inspired you to set your book there?

I lived in Nevada for ten years, from 1983 until 1994 and, living there, enjoyed exploring the American West. Growing up watching Westerns, as a lot of folks my age did, it was awesome seeing the actual movie locations for films like The Shootist (one of my favorite John Wayne films, shot, in part, in Carson City) and the popular TV series Bonanza (filmed at Lake Tahoe and, to a lesser extent, Virginia City).

I was pastor and head of staff of the First Presbyterian Church in Carson City during those years, which many referred to as “the oldest church in Nevada.” My involvement fostered my interest in the state’s historical discussions and, at times, gave me access to a wonderful set of characters state-wide:  a county sheriff, for instance, who ended a high school graduation party by shooting holes in the kids’ beer kegs, as well as the daily drama offered by a couple of the state’s governors, a variety of state senators and assemblymen and women.

East Jesus, Nevada, the first novel in the W. W. Ronin series of Westerns takes place in Carson City, Virginia City and Reno. Much of the action in the second novel, Lady of the Lake, (which will be available on Amazon late June) happens at Lake Tahoe.  The third novel, The Pinkerton Years, takes place in Virginia City, but includes scenes and history from Pennsylvania and northwestern Tennessee.

3. When and why did you decide to write a novel?

A couple of years ago, my late son Jared gave me an unusual Christmas gift that got me considering the question, “What would you do if you knew you couldn’t fail?” The gift wasn’t nearly as important as Jared’s example. A skilled mountaineer and member of the Mazama’s (an elite northwest climbing fraternity), Jared died just after I finished the book, February 6, 2012, while descending Mt. Hood.

I’ve got a couple of non-fiction manuscripts that form an unpublished backlist. But the thought of gathering together over two dozen years as a pastor and martial arts teacher (don’t ask) with a life-long love for language was a natural one. Choosing to write fiction instead of nonfiction was the bigger challenge, as I really didn’t read fiction until recently.

4. As someone who has written and preached sermons, Gregg, how was sitting down and working on a novel similar or different?

A more religious person might want to respond, “very different.” But to my thinking, the process wasn’t much different at all.  My graduate training—a Masters in Divinity, a Doctorate of Ministry and a second, but unfinished doctorate in counseling and educational psychology — situates me well for writing historical fiction. I get the flow between the details of an event and an event’s significance, so I’m most fascinated by the effect real events have on the interior life of my characters. But the process’ similarity surprised me. I essentially do the same thing I did when writing a weekly 3,000 word sermon. I sit in a chair until ideas come to me and, listening to them, try to be an honest scribe.

I’m a big fan of not knowing where you are going when you begin to set words down on paper. Novelists can be divided into two camps, I’m told: those who outline beforehand and those who don’t. I don’t. I have no idea what my characters are going to do, feel or say until they actually tell me. Outlining is important to the process of writing. But as I practice it, it’s only one tool in a toolbox of tools, and is most helpful when one’s point, plot or characters begin to go astray.

5. Your novel is the first in the Ronin Series of Westerns. Please tell us a little about the other two books and where you are in the writing process.

All of my novels in the Ronin series exploit the real people, places and history of Nevada. Lady of the Lake, just about ready for editing, is situated in the fall of 1880, just months after the first ends, in the little town of Glenbrook at Lake Tahoe. The Comstock was in decline at that point and, with it, much of the supporting industries, e.g. farming, timber and so on. Two Washoe Indian men are murdered at the lake. County and Federal law enforcement seem uninterested until Ronin gets involved. This second novel in the trilogy allows me to explore the history and spirituality of the Washoe Indian tribes who, to this day, think of Lake Tahoe as their home and, with the Shoshone and Paiute tribes, populate northern Nevada.

The Pinkerton Years carries my main character from the close of the Civil War in 1865–my paternal great grandfather’s participation in Biffle’s 19th Confederate Calvary provides the background–until Ronin arrives in Nevada a dozen or so years later. The main grist of the story focuses on his leaving the Saint John’s Episcopal Church in Wichita, his subsequent Pinkerton experience investigating a crystal ball gazer mentioned in the first book, and a more contemporary investigation of the same spiritualist phenomena on the Comstock, many years later.

6. Who are some of your favorite authors?

Well, that’s a tough one, having spent so much time reading non-fiction. But I’d have to give the latter-day prize to three writers: Anne Lamott who, in her best practice, is the master of long sentences and interesting excurses. Kurt Vonnegut, my late son’s favorite author, a social critic and compelling humanist, whether he’s writing science fiction or simply describing a character or scene. Ralph Waldo Emerson, whose essays, despite my early resistance given certain required Presbyterian points of view, ended up reforming mine. Perhaps also novelists Carl Hiassen and Randy Wayne White. Both writers take their Florida venues seriously enough that even the most casual of readers learn something.

7. You’re involved in fast draw shooting. What exactly is it, and did that experience inspire you to write a western?

Fast draw shooting puts a participant in front of a steel target and a timer, in a competitive environment, with a western period firearm, wax bullets or blanks and, very often, a cowboy hat, boots or skirt.  It’s popular the world over and, at one point maybe forty years ago, was a very fashionable sport.

Participants are able to draw from a cowboy-style holster and hit a target 5-21 feet away, in 3/10s of a second or less.  I’ve started a couple of fast draw clubs since I began in 2007, took third place in my age category a couple of years ago in a state contest, but generally enjoy middling times in the local competitions, where my shooting alias is, interestingly enough, W. W. Ronin.

I like to think the years I spent in Nevada doing ministry, my experience as a martial arts teacher and businessman, and my enjoyment of certain western shooting sports contribute realism to my books. Thus the words that describe the W. W. Ronin series of Westerns: Real people. Real places. The way the West was really won.

Thanks so much for visiting the Seven Questions Series, Gregg, and congratulations on the release of East Jesus, Nevada. Learn more at www.greggtownsley.com. And East Jesus, Nevada is available through Amazon.