Author Interview: Cari Luna on New York Squats, Creating a Sense of Authenticity, and What Fits (Or Doesn’t Fit) in a Novel 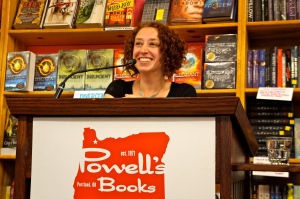 Cari Luna, author of The Revolution of Every Day.

Cari Luna’s debut novel, The Revolution of Every Day, delves into the 1990s New York squatting movement by peeling back the politics and exploring individual characters, their histories and personalities, their choices and mistakes, and how much they care about their buildings.

It’s a remarkable work, mixing philosophy and the possibilities people create when they come together as a group, while still keeping true to the dark reality of street life. In Thirteen House, the main squat featured in The Revolution of Every Day, the residents form a tight-knit community infused with hope, ideals, and hard work. We see them earn their sense of ownership as they repair stairs and fix leaks in their building, while the tension in their relationships begin to crack the emotional foundation. As the city tightens its grip on the city’s squats, we see what’s at stake for these individuals, how what they have built is a home for themselves, a refuge, something essential and irreplaceable.

The Revolution of Every Day was published by Tin House in 2013.

I’m so thrilled to be hosting Cari today as part of the Seven Questions Series.

1. Tell us about The Revolution of Every Day.

The Revolution of Every Day is a novel set in New York City’s Lower East Side in the mid-1990s, in a community of squatted buildings. It’s set in two buildings—Thirteen House and Cat House—and told from the points of view of five squatters. It’s fictional, but inspired by the actual history of the Lower East Side squats. There’s a political storyline, as the city attempts to evict the squatters, but for the most part it’s a story about people. The squats are just the world they move through.

2. What prompted you to write a novel about the New York City squats? Did the idea come first, and then the characters followed, or did you start with the characters and then decide to put them in this situation? 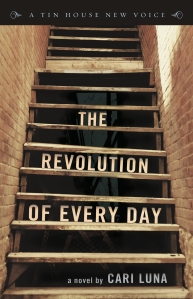 I began this novel in 2005 when I was just four weeks pregnant with my first child. I was happy to be pregnant, but it hadn’t been planned, and so as I started writing the novel I was still trying to get my head around what it meant to be someone’s mother. That led me to thinking about New York City, where my husband and I were born and where we were living at that time. I thought about what it was going to be like to raise a child there, and how much it had changed since my husband and I were children. I wanted to understand why and how my city had changed, and the most obvious answer was gentrification.

The squat storyline was inspired by a massive militaristic eviction that the city of New York carried out against two squatted buildings on May 30, 1995. That eviction—which employed snipers, SWAT teams, helicopters, mounted police, and an armored tank—cost the tax payers a million dollars. It seemed clear to me that that eviction—which was the culmination of years of struggle and fighting between the city and the squats—marked the tipping point in New York. That was when money won out in the Lower East Side.

3. Speaking of characters, your choice to tell the story from different perspectives really draws readers into the Thirteen House community, letting us see the fractures and hopes and expectations and losses within the squat and within each family unit. When did you make that decision, and was the manuscript always in third person? Were there any point of view characters you had to cut out or add in as the writing progressed?

The manuscript was always in third person, but for the first several drafts—maybe as many as six drafts, if I recall correctly—it was told from just two points of view: Gerrit and Amelia. I don’t outline—I write blind. When I got started I became so fascinated with their relationship that I just stayed in their heads, with everyone else who now has a POV as a side character. The result was a constricted little novel where I’d hoped to write something expansive about the New York of that time. So I gave three more characters voices, and that opened things up.

4. The Revolution of Every Day feels true and honest; it’s a portrait of a fictional community at this real time and place in New York City’s recent history. I especially enjoyed the scenes where Thirteen House residents were fixing up the building, putting time and scrap materials into making it better. What kind of research did you do to get that authenticity on the page?

I was never a squatter, but I did live in the neighborhood at the time, and witnessed some of the squatters’ actions, such as the retaking of two buildings on Ea. 13th on the 4th of July (Independence Day!) following the big 5/30/95 eviction. So that helped a great deal in terms of authenticity. I also relied on articles and list-serv posts from that time that I was able to dig up online, as well as a few excellent books: Glass House by Margaret Morton, Resistance: A Radical Social and Political History of the Lower East Side, edited by Clayton Patterson, and War in the Neighborhood by Seth Tobocman. I also just made a whole lot up. Fiction, you know.

5. At your Portland launch, you said, “You can only accomplish two or three things in a novel without completely bogging it down.” Please elaborate. And I’m curious about whether you knew what you wanted to accomplish with your novel when starting out, or if those things emerged organically during the writing process.

When you sit down to write your first novel, there’s the impulse to say EVERYTHING you’ve ever wanted to say, to tackle the entire universe, to make a big, grand thing. (Or, at least, this was my experience. And not with this novel. Though it’s my debut, Revolution is the second novel I wrote.) You’ve probably been writing a lot of short stories, and you get going with your novel and it just feels like there’s SO MUCH SPACE. You have tens of thousands of words. A hundred thousand words or more! You’re alternately giddy with power and daunted by it. But when you really get into it, you find it’s not all that much space at all. If you try to say everything you’ve ever wanted to say, it’s going to feel noisy and cluttered and hard to follow and your reader—if they’re kind enough to stick with you—isn’t likely to hear what’s really important through all that extra baggage. You’ve got to let a few parts stand in for the whole. You’ve got to make some choices. For example, in one review of Revolution, the reviewer asked why none of my characters ever went to a punk show, because that had been a large part of the reviewer’s experience of that time and place. The answer is that I had to make choices. I couldn’t recreate every possible aspect of the life of a LES squatter from the mid-nineties and still build a strong, clear narrative. Proust could have done it. The rest of us probably can’t pull such a thing off with quite the same result.

As far as Revolution goes, I had a vague sense of what I wanted to do when I began. I write to answer questions for myself, to understand what I think. When I began it, the big question was “What the hell happened to New York?” So there was the goal of discovering the answer to that. And along the way I wanted to tell the story of my old neighborhood at a very particular time. An epic tale of New York and some of its people. But in terms of themes, and the interpersonal stories it explores, that all emerged as I wrote.

6. Tell us about your “Writer, With Kids” series. What gave you the idea, who have been some of your participants, and how have readers reacted?

I run a series on my blog called Writer, with Kids. It features a different author each week talking about finding (or failing to find) the artist/parent balance. Some posts are interviews and others are essays; each participant gets to choose which they’d prefer to do. The idea came about at a time when I was really struggling to find that balance for myself. It was something I talked about a lot with my friends who were also working artists and parents and I thought it was a useful conversation to take public, that others might find it helpful. I receive wonderful feedback all the time about it. It’s truly helped people—myself included—which is exciting. Participants have included Jane Smiley, Geraldine Brooks, Wendy Chin-Tanner, Peter Rock, Yannick Murphy, and John Roderick. I make a point to feature writers at various stages in their careers and various points in their parenting lives. I also host Writer, with Fetus posts for participants who are expecting their first child. They then write a follow-up post six months or more after the baby’s been born, so we get a nice before-and-after perspective: expectations vs reality.

7. What are you working on now?

I’m working on my next novel. It’s set in contemporary Portland. It’s about online vs real life identity and sexual obsession.

Thanks so much, Cari!

Learn more at cariluna.com or the Tin House Books website. The Revolution of Every Day is available at your local independent bookstore or online.

5 Responses to Author Interview: Cari Luna on New York Squats, Creating a Sense of Authenticity, and What Fits (Or Doesn’t Fit) in a Novel