Interview: Miranda Beverly-Whittemore on Her ‘Literary Beach Read,’ Naming Characters, and Prepping for a Book Launch 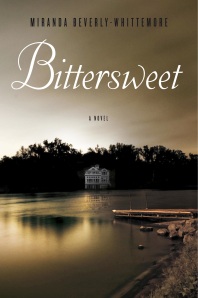 Miranda Beverly-Whittemore’s third novel, Bittersweet, ushers readers into the elite world of the Winslows, a wealthy family with a sprawling, historic estate in Vermont. Protagonist Mabel Dagmar gets invited to spend the summer in one of the cottages with her glamorous and unpredictable college roommate. Even before she arrives, Mabel yearns to belong in this fresh, bright world of privilege. Things aren’t what they seem, though, and as she connects with different members of the Winslow family, and begins collecting clues to the past, the novel races to a heady conclusion, pitting her beliefs against her desire to be accepted.

Bittersweet, due out May 13, is a gorgeous, often surprising, testament to the falsity of appearances, with a heady pace and a wholly American vibe that’s reminiscent of F. Scott Fitzgerald. The accolades are streaming in, including a starred review from Kirkus, and just being chosen as #3 on Entertainment Weekly’s Must List for the week.

I met Miranda years ago, at Vassar College, where we were both English majors, and I’ve admired her work for years. Her first novel, The Effects of Light, came out in 2005, followed by Set Me Free in 2007. I’m so excited to see Bittersweet greeted with such enthusiasm from reviewers and readers this spring. It’s a masterful third novel, full of Miranda’s beautiful prose, anchored to a story that keeps twisting and turning all the way to breathtaking conclusion.

Today’s the last day of Miranda’s OMG! All The Books! Giveaway, and she’s giving away a copy o Bittersweet. Anyone who enters will also be automatically entered to win all twenty-four books. Ten runners-up will also win Bittersweet.

Bittersweet is what I’ve been calling a literary beach read; it’s my attempt to write the kind of book I love to gobble up on vacation. The Secret History, The Line of Beauty, Atonement, The Emperor’s Children—all of those contemporary novels are about outsiders hungering to belong to a special inner circle, which I realize is a tale I’m drawn to again and again. Bittersweet is a hat tip to these books, a blend of literary language and a juicy plot, about a plain-Jane named Mabel Dagmar who is invited by her wealthy, beautiful college roommate, Ev, to spend the summer at Ev’s family’s lakeside estate. At first, Mabel believes she’s won the lottery—she finally has the life of her dream—but it’s her nature to sleuth, and as she digs up Ev’s family’s secrets, she can’t help but be drawn into their web of lies, until she is over her head and implicated in their bad behavior.

It was so much fun to name these characters! Mabel’s original last name was actually Glouch, but when I sold the book, my wise editor made the point that it was almost too Dickensian, so Dagmar fit the bill in a more subtle way. I wanted the Winslows’ names to flow like water, to be unusual and easily shortened in the way of the WASPs (and it’s no mistake that Winslow has the word “win” in it).

Genevra “Ev” Winslow came first. Once I knew that was her name, I knew her much better. And I understood that her younger sister needed a matching name, so she became Luvinia “Lu” Winslow. The brothers—Galway, Athol, Banning—came next, followed by the older generation, Birch and Tilde and Linden (“Indo”) and CeCe et al.

Once I knew how many characters would be in play, I signed up for Ancestry.com so I could use their family tree software on my iPad! At one point, there was a Pippa Winslow in every generation, but that got confusing (even if I think it’s realistic that in a family like the Winslows, there would be a name recycled in such a way), so the matriarch got to keep the name Pippa, and the secondary characters got new ones.

My first two books were incredibly close to my heart and, although they had a middling bit of commercial meat on them, they are definitely on the literary end of things. Bittersweet was a blatant attempt to write something that lands squarely at the crossroads of literary and commercial. I wanted to know if I could write such a book, a book that, quite frankly, I’d have a better chance of selling (I tried to sell two other books after my second novel was published, to no avail). But I also wanted to be able to look myself in the mirror; my assignment to myself was if I was attempting to write a novel with an eye on commerce, I had to write it well. I wanted the language to be beautiful, the place to come alive, the characters to be three-dimensional. What I didn’t take into account was how fun it would be! Man, writing this book was a blast. A publishing friend of mine who has read all three of my books said the difference with this one was that she felt like I was smiling the whole time. I love that.

He’s an online marketing consultant named Dan Blank—I’d taken a course about building my author platform back in the fall of 2012 before I sold Bittersweet, when I was feeling really lost in my career. When I signed the ink on Bittersweet, I knew I wanted Dan’s help navigating today’s rough waters—so much is required of a writer these days, and it’s easy to get overwhelmed without a compass. I’d made a pledge to myself that if I sold another book, I’d do everything I could to get word about it into the world. He’s helped me be incredibly thoughtful about how to exist on social media, he’s helped me undertake a number of web projects (redesigning my website, building FriendStories.com, and keeping the Bittersweet Booklaunch Blog with me), not to mention running a 24-day-long giveaway on my website in which we’re giving away 24 of the hottest books coming out this spring. There is no way I could have done even a tenth of that if I didn’t have Dan’s help.

That said, there is plenty one can do without having someone like Dan on one’s team. I think the biggest factor is time. Start early! Be thoughtful about what is realistic for you, but dream big. Be friendly and generous and warm, and people (even online) will respond in kind. Remember that the wonderful thing about the internet is that it is mutable—you can tweak and adjust as you go along. And I hope the Bittersweet Booklaunch Blog will be a resource to writers who are doing this for the first time; we started it because I realized there wasn’t much practical advice out there, there’s just kind of this expectation that you’ll “need to do a lot of stuff online,” but not much guidance about what that actually means. Dan and I kept talking about wanting to keep it emotionally honest, and I’ve tried to lay bare the challenges and triumphs of a writer facing down publication!

I’m thrilled that Cosmopolitan has excerpted one of the most scandalous chapters from Bittersweet in their May issue! And I’m also so so SO excited that Martha Stewart Living has chosen Bittersweet as their May book club pick. They are also running one of the ten evocative book trailers that my filmmaker sister made with my family and friends up on the lake last summer—you can see them here.

There’s more good news coming along, but I’ve been sworn to secrecy! I’m so excited that the response to this book has been so warm—it’s really a dream come true that the press is starting to say that it’s a book they think people will want to read too!

At the center of Bittersweet is a tumultuous best friendship between Mabel and Ev. I found that when I started telling people about my book, they almost invariably volunteered a tale about a rocky girlhood friendship of their own. I suppose that up until that moment in my life, I’d always kind of believed that my childhood friendships were these all-consuming love affairs, but I hadn’t necessarily seen it as a universal. But then there were all these stories being offered up and I realized, this is a web project!

I welcome submissions to FriendStories; please, please, please submit!!! I get so excited whenever one pops up in my inbox. Check out the guidelines here.

This time around, my vow is to enjoy myself. My book comes out on Tuesday the 13th. The day before, I’ve got a lunch and some spa pampering booked with a friend whose novel is coming out on the 13th too! And then on publication day, my sweet editor is taking me out to a fancy lunch and I’m going to get my hair blown out in anticipation of the two readings I’m doing on the next two days (and just because, you know? When the heck else am I going to get my hair blown out?). On the 14th is my big booklaunch at Bookcourt, a fabulous independent bookstore here in Brooklyn. I’ve already had so many friends and family say they’re going to be there, and my goal is to be as present as possible—it’s awe-inspiring to think of so many people I love all gathered together in one place, toasting something I’ve worked so hard on. My gratitude knows no bounds.

Thanks so much for participating in the Seven Questions Series, Miranda.

MIRANDA BEVERLY-WHITTEMORE is the author of three novels: Bittersweet (May 2014), The Effects of Light (2005) and Set Me Free(2007), which won the Janet Heidinger Kafka Prize for the best book of fiction by an American woman published in 2007. A recipient of the Crazyhorse Fiction Prize, she lives and writes in Brooklyn and Vermont. Check out her website, FriendStories.com, and the Bittersweet Booklaunch Blog.

2 Responses to Interview: Miranda Beverly-Whittemore on Her ‘Literary Beach Read,’ Naming Characters, and Prepping for a Book Launch