Our beloved Landfall launches tomorrow, Aug. 11, which isn’t that many minutes from now. Instead of going to sleep, I’m thinking about community, and how far the press has come since I started the Seven Questions Series right here.

Here are a few photos from Sunday’s Forest Ave party, held at one of our author’s houses. These people believed in me, they sent me their manuscripts, or they signed up as contractors to help shoulder the workload alongside me. Everyone marvels at me being a one-woman show, but look at all these writers, editors, and our graphic designer, and their partners and spouses. We’ve launched this business. And we’re launching Landfall. 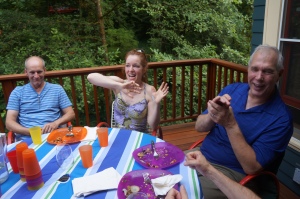 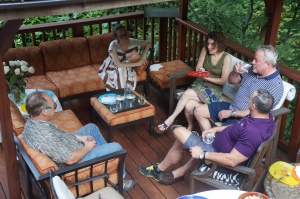 Landfall, by Ellen Urbani, has been blurbed by Pat Conroy, Fannie Flagg, and Garth Stein. It’s been endorsed by the president of client services of The Perseus Books Group and hand-sold to booksellers across the country by our distributor, Legato Publishers Group. It’ll be in Books-a-Million stores across the country, and numerous Barnes & Nobles across the country will feature it on New Releases tables starting Aug. 18.

This book. It’s about Hurricane Katrina. Set during the storm, and after, from the points of view of two eighteen-year-olds and their mothers. This author. Ellen Urbani. She’s got an amazing bio and background, including being a grief and trauma counselor, training that absolutely factors into her compassionate portrayals in her novel, her second book after the memoir When I Was Elena. She’s going on a twenty-city book tour, starting next Monday. Landfall has been chosen as a common reads selection for Junior League of Portland, and by book clubs across the country as part of our 50 in ’15 Challenge. Ellen is represented by Books in Common, as one of the company’s top fifty featured speakers.

Ellen’s decision to give a book to an area hard-hit by Katrina for every twentieth person who attends one of her events was profiled in the Huffington Post on Friday; her article on Hurricane Katrina reading appeared as a feature story on Literary Hub today.  This is just the beginning of the next step of Landfall‘s journey; I acquired the book one year ago, last August, and have been working on it every day since, as have the rest of us, doing our parts to share this important novel. As Kirkus put it, “Urbani boldly sets her story among some of the most disturbing events of that time, sensitively evoking the desperation of the survivors of the hurricane and its mishandled aftershocks. To her great credit, she never shies away from the realities of poverty, race, and racism, nor does she fail to give people, both white and black, individual characters, unique histories, and often warm hearts.”

Twenty minutes and counting to midnight. Congratulations to Ellen and the whole Forest Ave team, and thank you to all our readers and our loved ones for cheering for us every step of the way. I want to prove that the traditional publishing model still works, that a book that deserves attention can rise to the top, that genuine hard work can build an audience and word of mouth. That a novel about a horrific hurricane that made landfall ten years ago this month can open minds and break hearts and make people turn off their digital devices and talk to each other, and feel, and remember this moment in American history.

Publisher, Forest Avenue Press
View all posts by Laura Stanfill →
This entry was posted in Uncategorized. Bookmark the permalink.