Exactly a year ago, I interviewed Larissa Brown on the Seven Questions Series about her beautiful novel-in-progress, Beautiful Wreck, a time-travel Viking romance.

Soon after she finished the manuscript, she landed a publishing contract with Cooperative Press, a craft publisher growing its trade fiction catalog. Her novel launched this weekend and is now available in paperback and ebook forms.

Today, in honor of Beautiful Wreck‘s launch, I’m happy to present a mini-interview with Larissa.

1. Larissa, you finished your debut novel, found a publisher who loves it, and now Beautiful Wreck is a real book, out in the world for anyone to read. As much as we all dream of these things happening one after the other, in a timely fashion, usually it takes years (and years). So, first off congratulations, and second, do you have any epiphanies or advice stemming from this exciting moment in your authorly career? 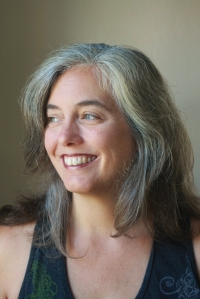 Thank you, Laura. Honestly, I had in my head that it was going to take years and years, and so it was initially so shocking, it was hard for me to just say yes and go for it. The advice I’d give is to take the chances that come. Weigh them carefully, but be open to surprising opportunities. Learn from the experience, and then write a next book.

Also, make long-term connections. This all unfolded in an orderly fashion for me, but I’d been laying the groundwork for years in a way. I met Shannon, my publisher, through blogging a decade ago, and we’ve done projects together through our work in the fiber industry. I could not have come out of nowhere and handed her a book. She’d been watching me research and write this Viking romance for two years on pinterest and facebook. The same goes for readers. Laying the groundwork through social media takes a long time. I involved people all along in the writing, and they were really ready to find out what’s in this book.

2. I love what you said about “glitter ponies” in our recent conversation. Please explain that phrase in terms of your book’s intended audience.

Hmm, I think I meant glitter AND ponies. 🙂 We were talking about the popularity of YA books among adult readers. I am not a YA reader in particular, so I was talking out my elbow, thinking that adults might be drawn to YA because it gives us license to live in our teen minds again, wanting what we wanted then. I know, it’s a lot more complex than that and is different for each reader. But for me, I still want the glitter and the ponies I wanted when I was thirteen. Part of me still wants to be a princess. As an adult, it’s hard to give yourself license to still desire those things. To still desire wonder. So I wrote a book for adults that has glitter and ponies. (Actually, literally, now that I think about it.)

3. When writing this time-travel Viking romance hybrid, how much did you study genre conventions before or during the writing process? It feels likeBeautiful Wreck has the best elements of each—a carefully constructed and believable futuristic world, a heartfelt sense of reverence for tenth century Viking culture, and a strong woman protagonist who yearns for a powerful ax-wielding chief. And then I’d add that it feels like historical fiction, because of your extensive research and attention to detail, and also literary fiction, because the language is so crisp and beautiful. Were there any genre conventions you purposely decided to ignore or circumvent?

Thank you for all these kind words about my writing! It was the opposite, really. There are many genre conventions I made sure that I included. It started almost as a game for me, to write a time-travel romance, so as a set of rules to play within, I made sure it conformed to the standard. The female travels in time, she meets a powerful man who cannot love, she travels back to the future once and it is unclear if she’ll be able to return, he is wounded and the heroine cares for him, and more.

That was how I started. But then I didn’t think about genre again until the book was written and I looked at it and thought “Crap, what have I done? No one will know how to sell this. No one will know how to read it.” And in a way, that has held true with advance readers. In the beginning of the book Jen lives in the future, but she slips fluidly through time periods. I’m finding that people who are not readers of speculative fiction have a harder time either enjoying this or even getting it at all.

In most time travel romances, the “time travel” is only nominally described or explained. In one case, I read a book where it was just misty outside and a woman walked out of a pub and into a different century. My book is like sci-fi compared to that.

Several reviews say something like, “The beginning was hard to get into, but once she got into the past it was GREAT!” I feel like we need that beginning, nonetheless. Jen would not be who she is, and would not have the desires and strengths she needs, without those first twenty-five sci-fi-ish pages.